How’d You Get that Shot? 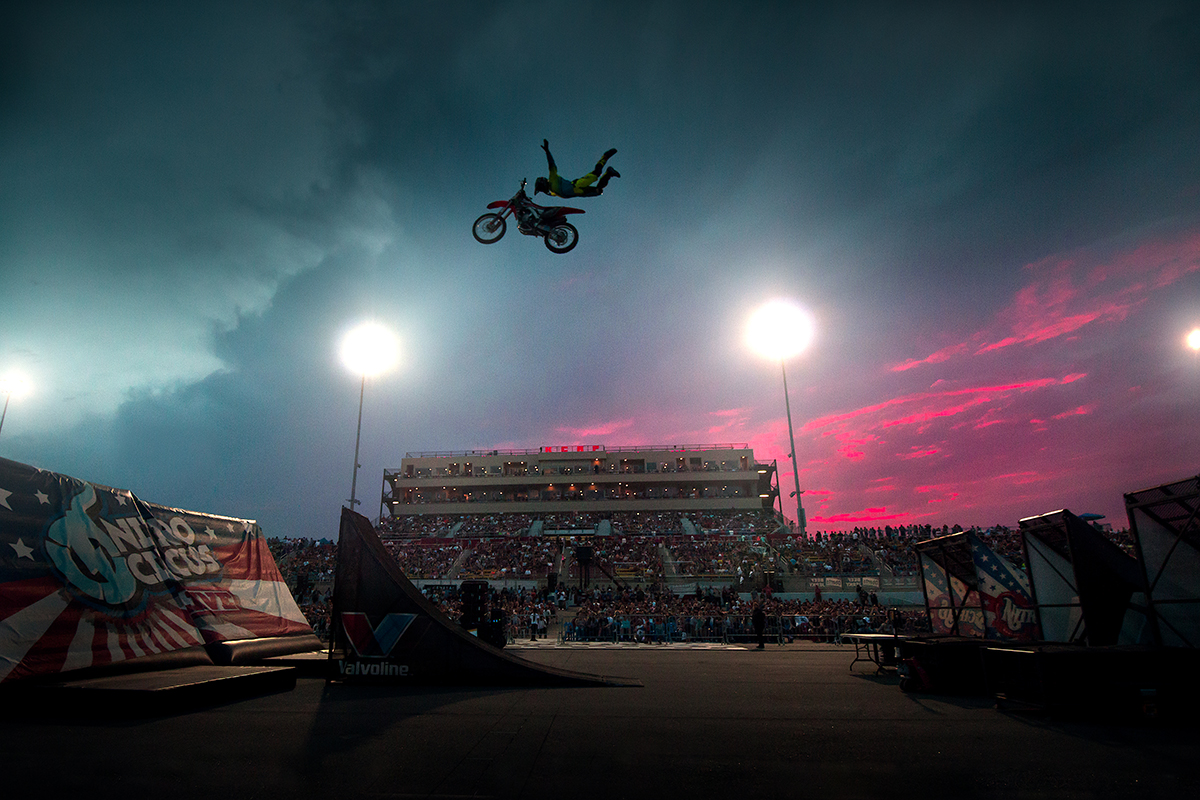 I took this photo at Nitro Circus, an “action sports collective” in Bakersfield, California. It’s one of the biggest action-sports events in the country, featuring BMXers, freestyle motocross stars, skaters, even scooter athletes—all the top guys out there to show the crowd their best, most daring tricks. I was invited out there by my buddy James Foster, whom I started racing cars with a couple of years ago. James is a professional BMX rider and recently won a gold medal at the X Games.

Because I have a media pass, I get free reign, more or less, on where I want to stand. I had originally set my camera up on a tripod to photograph the BMX jump, which is a smaller jump that you can’t see in this photo here. As the day started coming to a close, that’s when they brought in the motocross jumpers—and I had to quickly adjust to capture this shot.

I knew I wanted the composition to be super wide to capture the full crowd with the stadium lights backlighting the rider, so went as wide as I could go, to 10mm, using the new Tamron 10-24mm Di II VC lens. I hoped to show how huge that in-air trick was—my goal was that the final image would make the viewer feel like he or she was part of the crowd. That unreal sunset, which I got lucky with, simply put the photo over the top.

When they wrapped up the BMX jumps and brought on the motocross performers, I literally had no time to adjust the settings I’d had programmed for the BMX jumps. I simply grabbed my tripod and moved it up to the other jump as quickly as I could. I had just enough time to make sure the image was composed the way I wanted it. My aperture was set to F/8, and my shutter speed at 1/500th of a second. I set it on auto ISO because with the clouds and changing light during the day, I needed the auto ISO to compensate a bit. I knew those settings would work to freeze the action; I just hoped it would be in focus.

Speaking of focus, locking it down was another challenge. I use manual focus and then lock the focus ring down with tape so it doesn’t move. However, when the object I’m trying to focus on is going to be extremely high in the air, it’s hard to pick a focal length that will lock down the focus exactly how I want it to be. Even when I lock it in at infinity, it doesn’t always come out the way I hope. What I do in a case like this is pull the camera back and guesstimate: I’ll point it at something else, like a ramp or a light or something high up in the air, in the same general vicinity where I think my subject will end up when he jumps. Then I’ll lock the focus there and tape it before putting the camera back on the tripod and composing the image.

I triggered this shot remotely. I was about 150 feet to the left of the remote camera, shooting into the sunset. [Check out the video here to see a short snippet of how Daniel triggered his remote camera.] Now typically, if I were shooting through the camera myself, I’d wait until the motocross rider was in the air before I’d trigger the camera. But for a shot like this, where I’m using a remote Pocket Wizard, I trigger it to shoot right before the rider hits the jump. If I wait until he’s in the air like I usually do, he’d already be gone.

In post-production, I dodge and burn a lot, and I pulled out the shadows to bring the rider up, but that’s pretty much it. I didn’t have to go too crazy during the editing process, because everything just came together so perfectly. I was extremely pleased with how sharp this image came out using the Tamron 10-24.