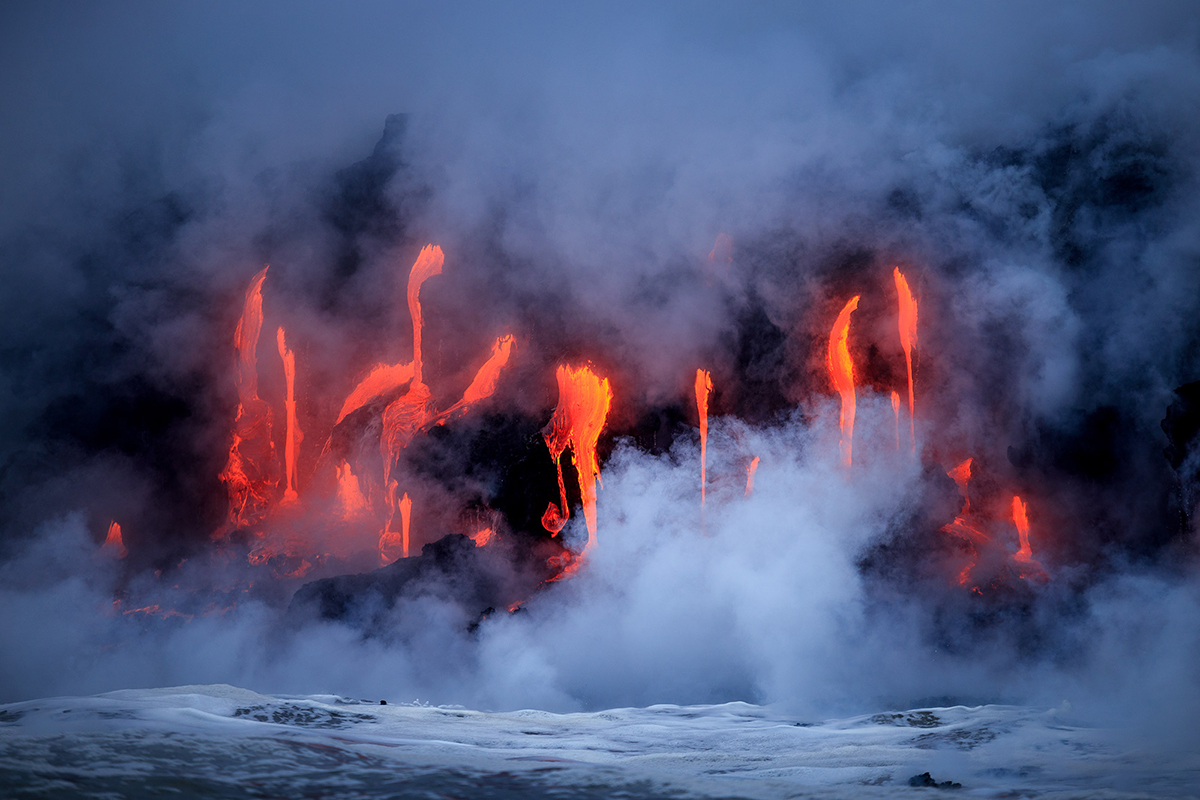 Ian Plant is known for his images in the most challenging lighting conditions, whether it’s under the night sky in Namibia or deep in an Icelandic ice cave. So when he heard lava conditions were optimal in Hawaii, he jumped on a plane—twice in four months. “My first trip was in December, but by the time I got there, the lava wasn’t flowing as well anymore,” he says. “I went back in March, and that trip was much more productive. I had the opportunity to photograph the world-famous ‘firehouse flow’ at the Big Island’s Kilauea volcano, which is where lava plunges 60 or 70 feet over a cliff and straight into the ocean in a continuous flow, like a molten waterfall. Just a few days after I photographed the firehouse, it stopped flowing.”

On his journey to the island’s most active volcano, Ian brought his new Tamron SP 70-200mm VC G2 lens. “The new 70-200mm is a terrific lens for handheld work in low light, which was useful for me since I had to do a lot of photography at night from a boat,” he says. “The Vibration Compensation (VC) feature on the lens, combined with a bright F/2.8 maximum aperture, allowed me to get the shots I needed.”

Before he heads out to lava flows like this, Ian makes sure he’s decked out in pants and a long-sleeved shirt to protect himself from the heat coming off the lava if he plans on getting close. “I also bring a pair of gloves, as my tripod can heat up quite a bit,” he says. “I haven’t had any problems with my camera, lenses, or tripod when I’m near lava—so far! Even if you don’t plan on getting close, however, the lava fields of Hawaii can be hot and dry, so bring sun protection and plenty of water.”

Next comes the task of determining how to approach this dynamic subject. “For lava entering the ocean, a boat is the best way to go, but surface flows—essentially flows of lava that have bubbled up to the surface, where they then slowly move down a slope—can often be accessed on foot,” he says. “You can get quite close to surface flows. In fact, I was close enough to mildly singe my arms—which ended up looking like a really bad sunburn. Always put safety first and be careful when approaching lava. A short telephoto zoom like the 70-200mm offers an ideal focal-length range for shooting lava, as it allows you to take photos from a safe, reasonably comfortable distance.” But even though Ian notes the element of danger that always accompanies photographing such a superheated subject, simple precautions should keep you safe. “I’d personally rate it as being no more dangerous than driving on the highway, as long as you’re careful and mindful of your surroundings,” he says. “In fact, some guides will bring tourists close enough to roast marshmallows, so it arguably isn’t much more dangerous than standing near a really big campfire.” Surface flows don’t move too fast, but Ian warns to always keep an eye out for sudden ‘breakouts,’ where the lava pours out faster than normal. “If in doubt, you can hire guides to take you to see surface flows—they can make sure you stay safe, and also avoid other hidden dangers,” he says. “For example, they know where the recent lava tubes have formed and can keep you from walking over an area that might be prone to collapse.” The greatest danger is when you’re near the coast where lava is entering the ocean, as large “benches” of cooled lava form and occasionally crack away from the land and collapse—sometimes in catastrophic fashion. “The National Park Service closes off parts of cliff edges that it deems to be dangerous, so as long as you obey those closures, you should be safe,” Ian notes. “Of course, plenty of tourists and photographers disobey the closings, which isn’t a smart thing to do. A bench collapse can suddenly make acres of land disappear in an instant, and anyone standing there at that moment will probably be killed. Don’t do anything stupid, though, and you should be OK.” 70mm, F/3.5, 1/200 sec., ISO 100
This photo was taken from a boat during the morning twilight as lava poured in a continuous stream several dozen feet into the sea.

When Ian is capturing lava photos while on a boat in low light, he’ll typically shoot wide open using Shutter Priority. “That way, I can set a shutter speed that will ensure sharp images, depending on how rough the seas are and how much the boat is moving,” he says. “When working on land using a tripod, depth-of-field is typically my chief priority, so I’ll switch over to Aperture Priority and select an aperture that will allow for sharp focus throughout the image frame. I always use the lowest ISO I can for maximum image quality.” However, light can change quickly when you’re photographing lava. “That’s true especially when there’s a sudden breakout and the lava gets temporarily brighter,” Ian explains. “That’s another reason I’ll shoot in Aperture Priority mode, which allows the camera to automatically compensate for the changing exposure. But I always keep an eye on my histogram, using exposure compensation if necessary to adjust my exposure.”

The best time of day to photograph lava: twilight or at night, Ian says, when ambient light levels have dropped enough for the glowing lava to stand out from its surroundings. And taking advantage of “color opposites”—the red of the searing-hot lava against a dusky-blue sky, for example—can make those colors pop. “I’m always looking for opportunities to juxtapose complementary colors,” Ian says. “Shooting during those times helps me achieve that pleasing warm/cool color mix.” Another tip: “If you’re doing wide-angle work, having some clouds in the sky can add color and texture to your photos.” Ian does tap into the digital darkroom after he’s packed it in for the day, but with a light touch. “I add contrast and saturation to optimize my photos, but nothing too dramatic,” he explains. “White balance is often my most important processing decision, especially if I’m shooting in the mixed light of twilight. In those situations, I aim to select a white balance that will preserve those cool twilight blues juxtaposed against the warm colors of the lava.”

To see more of Ian Plant’s work, go to www.ianplant.com.