Greg Piazza captures the angles, colors, and shadows of some of the Southwest’s most stunning structures with his Tamron 28-300mm VC PZD. 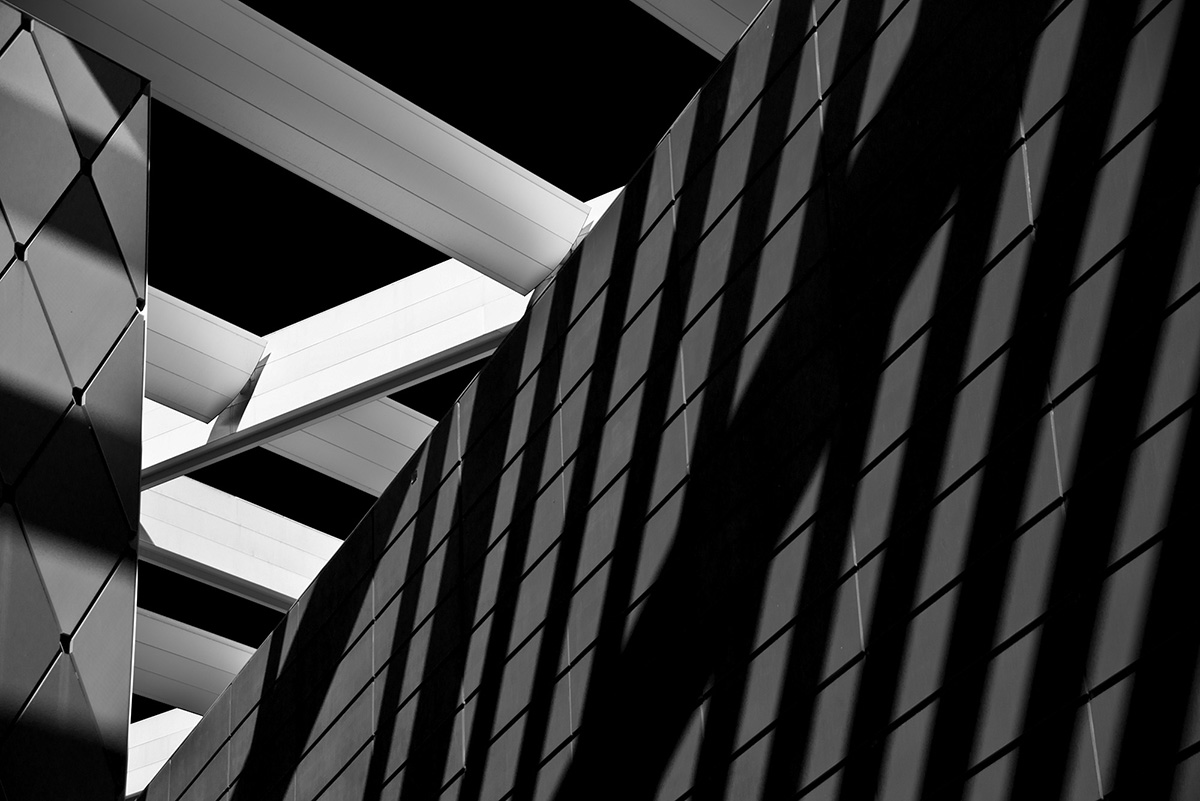 In 2004, a personal tragedy prompted Greg Piazza to turn to art. “My brother passed away in a car accident, and to take my mind off things, I started painting,” the Dallas artist says. “I eventually bought a basic point-and-shoot camera so I could take pictures of my paintings to upload online, and soon I began experimenting with how I was taking photos of those paintings—making abstract art even more abstract by concentrating on just certain snippets of each piece.”

Two years later, Greg became more serious about his work: He bought a DSLR and immersed himself in online tutorials, Photoshop, and learning how to work all of his camera settings. “I veered into landscape photography, including in Hawaii and New Mexico, where I travel to a lot for work,” he says. “About three years ago, I really started to notice the stunning architecture in Santa Fe—not only the style of the buildings and structures, but how far away you could get from them. In Dallas, it’s hard to put much space between yourself and the buildings, so this opened up the way I saw them. Then I became interested in how light and shadow changed the look of certain structures, and my work evolved from there.”

Today, the Tamron 28-300mm VC PZD lens is always at Greg’s side when he ventures out to capture the most aesthetically pleasing representations of the architectural gems around him. “When I first acquired this lens, my main priority was to have that 300mm reach, which offers me much more versatility and flexibility,” he says. “It allows me to do everything I want to do, whether that’s capturing a wider view or zooming in to focus on a building’s details. I also love how sharp the lens is, and the color rendering it offers, especially when I’m trying to show subtle tonal differences in various parts of a structure.”

Greg usually heads out in the middle of the day—”I like the high contrast of all the light and shadow I find between 11 a.m. and 3 p.m. or so”—and he likes to simply wander around in search of his subjects. Once he finds potentials, he sets to work seeking out the best angle. “Anyone is in the field with me will see me make a virtual 360 around the building or structure I’m interested in, looking for a composition that works,” he says. “Even then, I’ll still take pictures from a few different angles, especially if I’m traveling and not sure I’ll get back to that particular spot anytime soon.”

Finding the story behind each scene can help drive how Greg chooses to portray the buildings he photographs. “For example, the Santa Fe University of Art and Design had to close due to financial difficulties, and knowing that sparked some ideas as I was circling the buildings there,” he says. “For the building in my photo ‘Sentenced,’ the little windows at the top reminded me of a prison. Meanwhile, the discoloration going down the stucco on the front of the building made it look like the building was crying. To me, it seemed like the building was weeping because it had all of this knowledge and history within its walls, but it would never get to share that with anyone because it had been ‘sentenced.'” Although he’ll occasionally capture an entire building in his viewfinder, focusing on the details is what draws Greg in to a scene. “Again, ‘Sentenced’ is a good example of that,” he says. “I typically zoom in on certain parts of the building versus being more withdrawn from it and having a full scale of it with the sky. Most of the time I’m cropping down to just that one element that has some kind of impact with light and shadow. My overall goal with much of my life is to simplify things; I don’t like complication. I try to portray that in my artwork as well, in both my paintings and photos.”

Keeping an eye out for color contrasts to make his images pop is also one of Greg’s priorities. “Take my photo ‘Breathe,’ for example,” he says. “This was taken in Zocalo, a condominium community in Santa Fe that’s unique because it’s more modern than many of the traditional sections around the city. The architecture here is very angular—not the rounded corners you usually see. In this photo, I loved the contrast of the orange building against the bright blue sky, with just a touch of that wispy cloud that spurred the title I came up with.” His “Building Blocks” also allowed him to play with color, as well as perspective. “Many of my other photos of that building are very angular, taken from the side so you can see more shadow play,” he says. “For this pic, however, I wanted to get a direct-on shot so I could create that stacking effect of the different-colored ‘blocks’ leading up to the blue sky.” Even subtle tonality shifts can prove to be an eye-catching visual. “You can see that in my ‘Spill Over’ photo, once again taken in the Zocalo community,” Greg says. “That orange square on the upper right is one of the light sconces situated on the side of the garage door. I liked the contrast of the colors, but also the stepping down, or spilling over, of the shadow into the other, slightly different color dimension.” Deciding whether to convert an image to black and white comes when Greg is in front of his computer after a shoot. “As I’m processing my photos, I’ll often transfer them to black and white, then flip back and forth between the two versions to decide which one creates the most drama,” he says. “For my ‘Sentenced’ photo, for example, I couldn’t see it in black and white—I would’ve lost the contrast of the bright sky and the shadows. Other photos, however, lend themselves more to black and white.”

Take his “Changing Perspective” image, for instance. “This one was also taken at the Santa Fe University of Art and Design, and I’ve taken a different photo of this exact same scene at a different time of day,” he says. “If you saw those two photos side by side, you’d see how the varying shadows change depending on the hour—converting to black and white for this image allowed me to concentrate on that shadowing.” The same applied to “Structure,” captured at the Wyly Theater at the AT&T Performing Arts Center in Dallas. “This theater is about a mile from my house, so I return to it often,” Greg says. “My proximity to it allows me to go there at different times of the year, at varying times of day, and each time I discover new patterns in the shadows.” Black and white also worked well for Greg’s “Hoss 4” photo. “The sawhorse underneath that square block was yellow in real life, but when I converted it to black and white, I thought it made more of an impact being stark white with that shadow cast against the wall,” he says. Regarding post-production, Greg recalls a magazine article he once read about spending as little time as possible at the computer. “I’m very meticulous about that, right down to constantly air-blowing the dust off my lens while I’m shooting,” he says. “My biggest concern is making sure I don’t have to do any cropping. Of course, sometimes a weed or other distracting element can’t be avoided, and that’s when I’ll use the editing process to my benefit. But as far as trying to change the look and feel of the image, I ensure everything is done in-camera.”

Coming up with titles for his images is another finishing touch Greg enjoys in the creative process. “Some artists just keep everything untitled, so the viewers can completely make up their own version of what each image is about—the artists don’t want to provide you with any indication of their thoughts,” he says. “However, I’ve always been of the school that I want to give you a little bit of insight into my thoughts on the image, while still leaving it wide open for you to still find the nuances in the photos so you can ultimately interpret them your own way.”

One thing you won’t find in Greg’s images: people. “That’s intentional,” he says. I don’t include human form in any of my pictures. Many artists want people in their art because something as simple as a facial expression places conflict and emotion into the work. I’d prefer not to have that, however. In the end, I want my viewers to be able to create their own story, not think they’re seeing somebody else’s story play out in front of them.”

To see more of Greg Piazza’s photography and paintings, go to www.gallery7nine.com/.