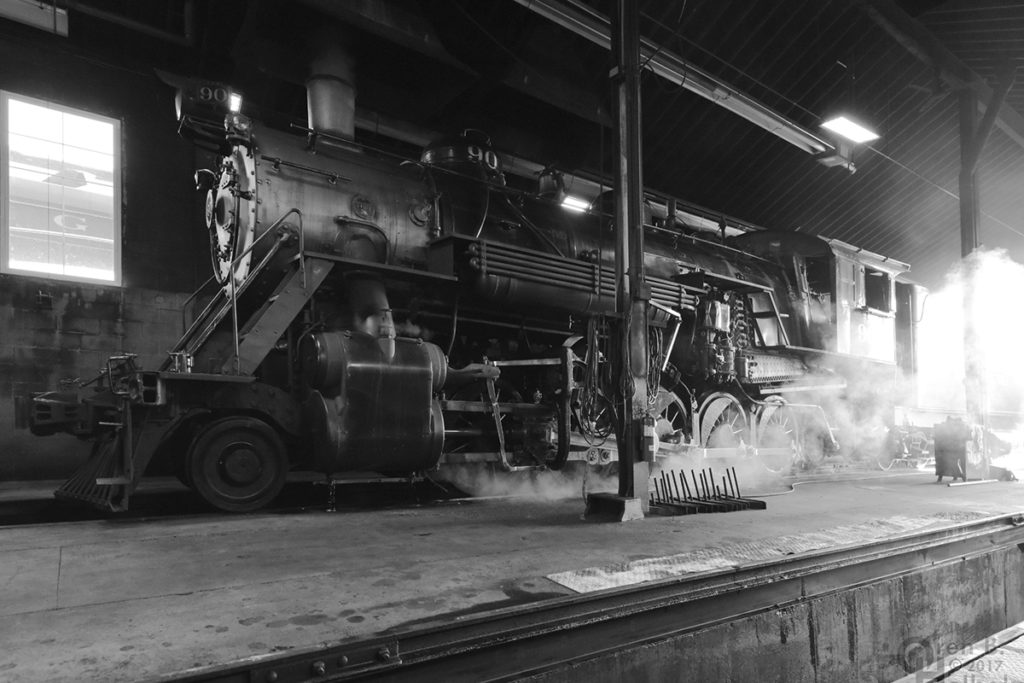 Oren Helbok has been fascinated with trains since he was a kid growing up in the Bronx, when he’d head down to the local tracks with his dad, a skilled amateur photographer, and have picnic suppers. “My first photo was of a steam train, taken when I was 6 years old,” he says. “I was completely swept away by the engines.”

Today, Oren’s fascination continues, and he now regularly heads out between 60 to 70 days a year to photograph the steam trains near his home in Bloomsburg, Pennsylvania. “The Strasburg Rail Road, which is the oldest continuously running short-line railroad in the country, is only about two hours south of me, and there are a number of other railroads that also operate steam,” he says.

When he was a boy, the trains were all about the hardware. “Now that I’m older, I’ve realized the thing that’s most important about the trains is the people who are doing the work,” he says. “So while I still enjoy capturing pictures of the trains themselves, I also want there to be some connection to either the landscape, the places they’re traveling through, or the people working on the trains.”

Oren recently spent a full day at the Strasburg site with the Tamron SP 15-30mm F/2.8 VC wide-angle lens. “This lens was recommended to me by a fellow photographer who said if I was looking for a stellar wide-angle lens, this was the one to try,” he says. “And it’s the best there is. What I was looking for was a super-wide-angle lens that I could use in a locomotive cab. I wanted to capture these guys at work, and I needed something that could get as much of that small space from inside as possible. The F/2.8 maximum aperture helps me out when the lighting isn’t great, and the Vibration Compensation (VC) feature is indispensable to counteract the movement on the train. Steam locomotives don’t ride like Cadillacs—they tend to bounce around, so the VC is infinitely helpful.”

Although he’s not trying to fool anyone into thinking his images are from another era, he does try to lend them a historical feel by eliminating modern distractions. “If I’m out in the middle of the landscape, for example, I’ll go out of my way to avoid a billboard or taking a shot right from the side of the highway, unless there’s some kind of story I can tell about how that train comes through that particular landscape,” he says.

As for how he photographs the people in his train photos, Oren tries to stay unobtrusive and captures many of his images from the back or the side, where his subjects’ faces aren’t in full view. “That’s not to dehumanize the work that’s being done, but to depersonalize it,” he says. “What I mean is, a photo isn’t necessarily about one particular person—that person stands for all of the people throughout the history of steam railroading who’ve done this job. I try to make my photos somewhat timeless that way.”

He did that with one crew member standing with his back to Oren. “That guy had been at work just 30 minutes, but it was August and one of the hottest, muggiest days I’d ever experienced down by the trains,” he says. “It was brutal. He’d already sweated right through his shirt. I wanted to show that aspect of the job without the distraction of his face or expression. I let the sweat speak for itself.” Oren enjoys showing the workers in their element, including when they’re hosing down and detailing the cars (a.k.a. the “spit-and-polish” job) and shoveling the coal. “The tight spaces I show here is exactly why I needed this 15-30 lens,” he says. “I wanted to capture as much of what’s going on as possible in a very small piece of real estate. I needed the big, wide view that the 15-30 offers.” Every month, a locomotive undergoes what’s called a boiler wash, which is when the crew cleans out any accumulated gunk. “When you put water into a boiler and heat it up, if there’s any crud in that water, it can separate out and end up coating the surfaces,” Oren explains. “That gunk blocks various orifices you don’t want blocked and makes everything less efficient, so once a month they have to open up all of those plugs and wash the boiler out.”

The man seen here had just finished up that job. “I shot this in the engine house, so there was a significant amount of light coming from behind him from the building’s large windows on the left-hand side,” Oren says. “There were also some fluorescent fixtures running across the ceiling, but by this time of day, with the other track empty and no engine sitting there, the light was able to come in unimpeded. That helped give me just the right illumination I needed for this image.” Sometimes Oren is even lucky enough to get some steam in the shot. “The photo of one of the crew working on top of the train was taken in perfect conditions for that kind of thing,” he explains. “With steam in particular, cold weather is best, as well as humidity. It was a seriously hot day, so I didn’t have that cold, but the air was so humid it couldn’t absorb anything else. That meant the steam, instead of vanishing, simply hung in the air.” Of course, he also had to grab a shot of the person at the top of the train crew hierarchy. “The engineer is the one who’s in charge,” he says. “He’s got his hand on the throttle and is the one who gets to drive the engine.” This was another chance for Oren to hold his camera outside the car as the engineer peered out of his own window, offering a more intimate environmental portrait. “At this railroad, they’re trying to provide a very particular experience for their customers, without modern items getting in the way,” Oren notes. “That’s why this engineer looks like he could’ve stepped out of another time period. All of the guys who work here dress the part and look authentic. Maybe once in a while you’ll see a crew member with keys attached to a caribiner, but that’s about as anachronistic as it’ll get.” Another experiment Oren’s been dabbling in: capturing pictures of the landscape while he’s riding in the train. “I won’t look through the viewfinder in those cases, but rather hang the camera out over the gate and either use Live View or just shoot away and hope for the best, based on what I’d already seen with my own eyes,” he says. “In this one in particular, you not only have the lines of the railroad car itself, but the lines in that field next to the train car. In Lancaster County, there are a lot of Amish farms, and they regularly plow their fields and create those lines. The VC on the 15-30 was critical here to keep everything sharp.” Capturing the whole train itself against the context of the landscape is another way Oren put the 15-30 to the test. “I had set myself the challenge of going out the entire day with that one lens, and using it not only in tight spaces, but also in wide-open areas,” he says. “I wanted to make the most of it in completely different situations. So yes, I show a train here, but it’s a train against that landscape, with that huge sky filled with cumulus clouds. That gives a whole new angle to the story I’m trying to tell.” 15mm, F/13, 1/400th sec., ISO 400
The railway’s bicentennial is coming up in 2032, and Oren is already in prep mode. “It’s going to be quite the party,” he says. “I’m extremely fortunate that I have so many options in steam railroading within a couple of hours of my home. I’ll have my camera ready!”