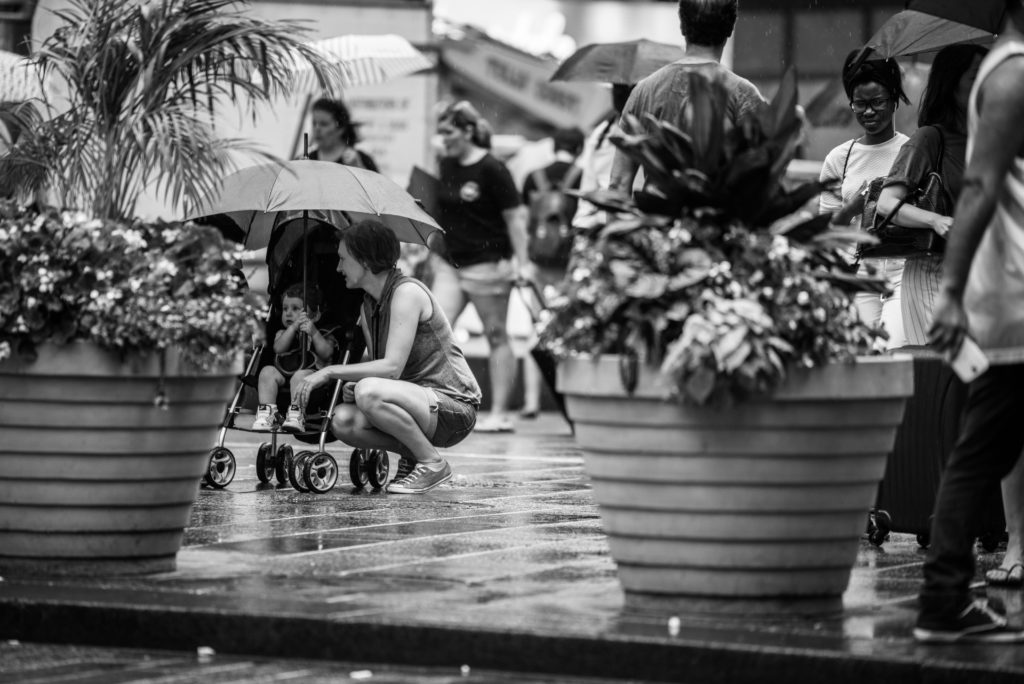 Dominic Cox grew up in the heart of New York City, with two parents who were artists and a penchant for people-watching. “I grew up with some of the best scenes in the world before my eyes,” he says. “I couldn’t draw or paint like my parents, but I soon realized that the camera allowed me to record what I observed. I’m still interested in documenting so many different things: city streets, the people in them, the beach and ocean, cars, boats, planes. I just keep my camera ready and wait for what unfolds.”

When it comes to portraits of people on the street, Dominic strives for authenticity. “There was once a photographer who said that all photographers are voyeurs,” he says. “I don’t know if that’s an absolute truth, but I do know I’ve recently come to terms with the fact that yes, I’m definitely a voyeur—but not in a creepy way. I don’t like to take photos of people who are posed and perfect, but I do try for pictures you wouldn’t be ashamed to see yourself in if I showed you. I’m trying to show something honest.”

When he’s out roaming the streets, Dominic brings his Tamron SP 70-200mm VC, SP 15-30mm VC, SP 150-600mm VC, SP 35mm F/1.8 prime and SP 85mm F/1.8. “I love the versatility I can achieve with these lenses in my bag,” he says. “The 15-30 is one of my favorites recently, and I’ve barely scratched the surface with it. And I appreciate the fact that Tamron is adding image stabilization across their line, especially since most of what I shoot is handheld using available light. I have to shoot this way. Not only is it difficult to carry a tripod around (many places won’t let you in with one), but I like to be able to have spontaneous movement, cut angles, get low. I don’t want another piece of equipment I have to drag along with me, because it would just slow me down.”

Dominic tries to balance his subjects and their environment, with his subjects taking center stage. “I have my favorite range of apertures and a distance I naturally shoot from,” he explains. “If I’m shooting on a city street, I’m not necessarily trying to blur everything out so you don’t know the person’s in an urban environment. For instance, high-end fashion photographers might take a picture of a model in an amazing gown in a back alley somewhere in the Meatpacking District, and they’ll shoot wide open and get close so they can blur out all the trash and other distracting elements, which I can appreciate in those circumstances. However, when I shoot, I want to show the background, as well as make the subject and the foreground stand out. I never tire of looking at a photo with an urban backdrop. For that reason, F/2.8 is one of my favorite apertures to use. It borders on documentary, because I’m documenting a specific place and a specific time.”

Dominic usually doesn’t know beforehand where he’s going to end up—or what photos he’s going to end up with. “I’m somewhat of a nomadic wanderer, though I will stay in a particular area for a while, just to observe and let things happen,” he says. “I want people to fall into my frame, for someone to show up pure and unaware. I want to capture the essence of the person without having them pose, and that 70-200 lens especially helps me stay unobtrusive so I can do that.”

Whether he concentrates on color or black-and-white photos is something Dominic tries to decide before he heads out. “I like to mix my work up,” he says. “Even on my Instagram, I’ll post three color photos, then alternate those with three black-and-white photos. I like black and white because it focuses your attention on expressions and textures more, on the light and shadows, whereas with color, it’s how we see things every day. I almost feel like you have to up your photography game to show the emotion you see in black-and-white photos in a color image, because you’ve got the color existing as an added distraction if you don’t shoot it right.”

Dominic finds himself on his photo walks at almost any time of the day. “Of course I appreciate the so-called golden hour in the mornings and late afternoon/early evenings,” he says. “But in the morning I’m usually out for a ride on my bike or doing some other form of physical activity (it’s when I’m the most motivated), and in the early evening, I’m a homebody who likes to have dinner and watch a movie with my wife. So I do find myself out and about in the midafternoon in the harsh sunlight, and I actually enjoy it. I like the challenge of working with different apertures and shutter speeds to get the desired results, of trying to create an appealing photo in demanding conditions. Anyone can take a photo when the ideal lighting is present. But try doing it when the clouds are going back and forth in between the buildings, when the light is constantly changing. That’s when you feel like you’re creating magic.”

Dominic talks about eight images he recently took in his hometown with his arsenal of Tamron lenses: I saw this scene first at the ground level. This is a bar on the South Street Seaport in lower Manhattan, right on the Hudson. I walked up from the riverside and saw the people milling about and thought it exemplified just hanging out in the city. I didn’t want to take the picture straight on, though, so I went up to the top of the building and shot down instead with my 15-30. I thought it was a more interesting vantage point, and it also offered a bit of anonymity as well. I liked the contrast of the lines of the metal gate leading down into the pattern of the hexagons below. This was a vendor in an outdoor flea market, and as soon as I saw him I thought, “Wow, I’ve got to photograph this guy.” He looked like a model you’d see in a Gap or Old Navy ad, with that tattoo under his clavicle reading, “Sometimes I imagine being free.” I also loved all of the different elements that complemented the photo, including the retro items he was selling. By placing the words “Brooklyn” into the top of the frame, I was also able to establish a place for the photo. I used the 70-200 for this, zooming all the way in to 200mm to capture this candid moment. I grew up in Washington Square Park, where this photo was taken, and it holds many fond memories for me. I would spend nights in this park, and I recently took a trip back to New York for the purpose of retracing a lot of my footsteps. This guy was a typical New Yorker, sporting a look I’ve seen many times in my own life—he’s wearing those signature boots, for example, which an old friend of mine who was a punk rocker used to wear back in the day. I identify with the look. Plus, the dog reminded me of Toto from the Wizard of Oz. In terms of the fountain, I wanted to add that in to make the image a little more dynamic, but without taking away from my subject. I blurred it out just enough so that the dog owner was still clearly the focus of the photo. I love black-and-white photography, but sometimes a photo just calls out for color. This night scene of a food stand in New York City was taken on 42nd Street with the Tamron 15-30 as I was heading west from the East Side. Now, I don’t usually eat the type of food you find at food stands like this, because I tend to eat healthier fare, but I wanted to take this photo because it’s the type of fast food that many New Yorkers live off of, even well into the night. I even called this photo “Farm Fresh,” as a tongue-in-cheek reference to what clearly isn’t farm-fresh food. I loved the color of the signs on the stands and the lighting. It wasn’t hard to expose for, since there was enough ambient light. I didn’t want it to be completely exposed anyway—I like the fact that there’s some shadow in the photo. I really wanted the focus to be on the light that was over him, where the steam was rising up over his cooking. Shooting it at 1/800th of a second at F/2.8 did the trick. This photo was taken in Times Square, where I was visiting after more than a year’s absence. I was there for hours with my camera, just waiting for photo opportunities to pop up. I was across the street, under a scaffold trying to stay dry, when I noticed this couple with their baby. You can’t see the dad, who’s behind one of the planters. But the real focus was on the mother and child. The beauty and intimacy of the moment just struck me, especially since the child was the one holding the umbrella while the mother knelt down next to the stroller in the rain. It was a warm, comforting scene. This photo was taken out of photographer’s envy. It was taken on Fifth Avenue, right near Tiffany and Co., an extremely ritzy area of Manhattan. The woman was a model on location, being fussed over by a team of people. I was across the street with the 70-200mm lens and I was able to steal that shot as the photographers commissioned to take her picture were at work doing the same. It would be a dream for me to have that kind of opportunity in the near future, with a model all styled with hair and makeup, and a team taking care of all the other logistics so I could just concentrate on composition. This woman is a vendor at an outdoor flea market, selling straw bowls, and she was sitting down during a break and taking a call. She happened to look up as I was taking the picture with the 70-200, but it’s not like I asked her to pose, so it still looks natural and authentic. Everything about this scene made for a great color photo, from her flawless, incredible skin to the colorful headwrap she had on to the tapestry of the bag she was carrying. The fact that you can see part of “New York” on the bag also gives a sense of place, like I discussed earlier. Although she was my subject, I wanted the bowls in the image also, so I placed them subtly in the foreground. Louis Mendes is probably one of the most photographed photographers in the world, and a centerpiece of the New York City landscape. I was returning a lens on Ninth Avenue last year, and he was out there taking pictures; he frequently stands in that location and takes people’s portraits for a fee. I spotted him, and he looked so interesting and distinguished, from the way he was dressed to his classic 1940s camera. I walked up to him and started a conversation with him and it led to this portrait with the 35mm.

To see more of Dominic Cox’s photos, check out his Instagram @PhotographyIsTheMuse.