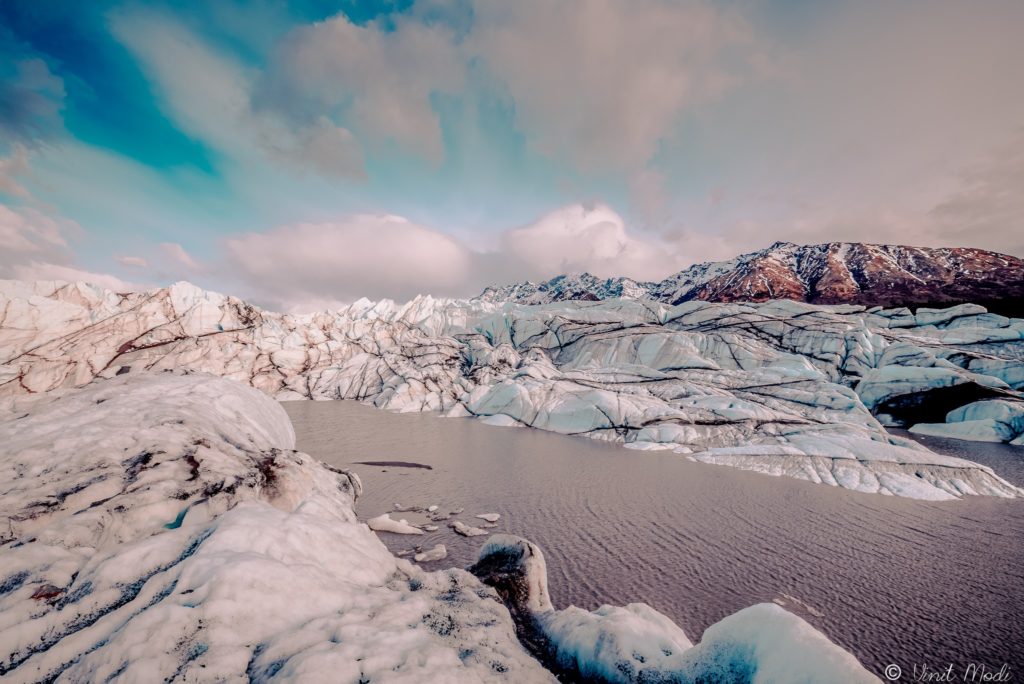 Two Tamron lenses accompanied Vinit on his trip to the Last Frontier: the Tamron SP 15-30mm F/2.8 VC and the SP 150-600mm VC G2. “I definitely wanted to have the 150-600 with me for taking pictures of wildlife,” he says. “And I found it useful for other logistical reasons. For example, when you’re in Denali National Park, you can’t take your private vehicle into much of it, so we were on a bus. Shooting through bus glass can be tricky, but my handheld pictures of the snowcapped mountains through the windows came out amazing.”

As for the 15-30, that lens has long been on Vinit’s wish list to take on a trip like this. “Landscape photography is my forte, and this super-wide-angle lens allowed me to achieve everything I wanted to do photographically,” he says. “The images also came out so vibrant. And the fluorine coating on the lens helped get me through Alaska’s rainy days without a hassle—I would just wipe the lens clean of any moisture and get right back to shooting.”

Vinit’s trip started in Anchorage, from which point he moved on to Denali National Park and then the Matanuska Glacier. “We also visited the Kenai fjords and Blackstone Bay and took a half-day cruise where we were able to see 26 glaciers,” he says. “It was a good workout for me, because with all of the gear I had, my bag weighed 26 pounds.”

At the time of Vinit’s visit, around Memorial Day weekend, there were almost 21 hours of sunlight daily—a photographer’s dream. “Even at 11 p.m. it’s still pretty bright outside,” he says. “It starts to get dim after midnight, but it never even really gets dark. There was a lot of transition during the day with the sun’s movements and the reflections off the glaciers, and it was fun to work in that ever-changing light.”

Vinit knew where he wanted to visit on his trip, though he didn’t map out exactly what he wanted to shoot. “I did the more touristy things, but I also talked to the locals once I got there and found out about spots you normally wouldn’t find pictures of online,” he says. He also quickly discovered that one of the advantages of taking pictures in Alaska is that you often have a 360-degree view to tap into. “That’s what I noticed when we were exploring the Matanuska Glacier with our guide, who’d dug into the glacier and inserted a metal pipe into it so we could taste the glacier water,” Vinit says. “As we were waiting for our turn to have a taste, I took this photo, with the sun behind me. It’s impossible not to take excellent photos when you’re constantly surrounded by mountains and scenery.”

Vinit admits he has a soft spot for clouds, and he’ll often wait for just the right conditions to capture a dramatic sky above his landscapes. “We were on the glacier for close to six hours, and during those last few hours I was waiting for the best light and wind conditions,” he says. “To shoot cloud movement, which I did in this black-and-white photo, you usually have to have a tripod and patience for the long exposures (30 or 45 seconds) that are necessary. But the clouds here were moving so fast that I was able to capture this image handheld, shooting at 1/400th of a second.” Because of the sweeping scenery in Alaska, Vinit tried to take some photos with people in them for a sense of scale. “I was photographing a group of people when I spotted this one lone visitor in the distance, just that small bit of yellow from his jacket surrounded by all of the blues from the sky and glacier,” he says. “The 15-30 shows such a scene like no other.”

Vinit was impressed with the detail he was able to get with the 15-30. “I was standing on the glacier, right in that final space before it starts to melt down to water,” he says. “I was able to break a small piece of ice off from the edge, and when I held it up, it looked like a piece of dragonglass from Game of Thrones. You can see every little bit of that piece of ice I’m holding up.”