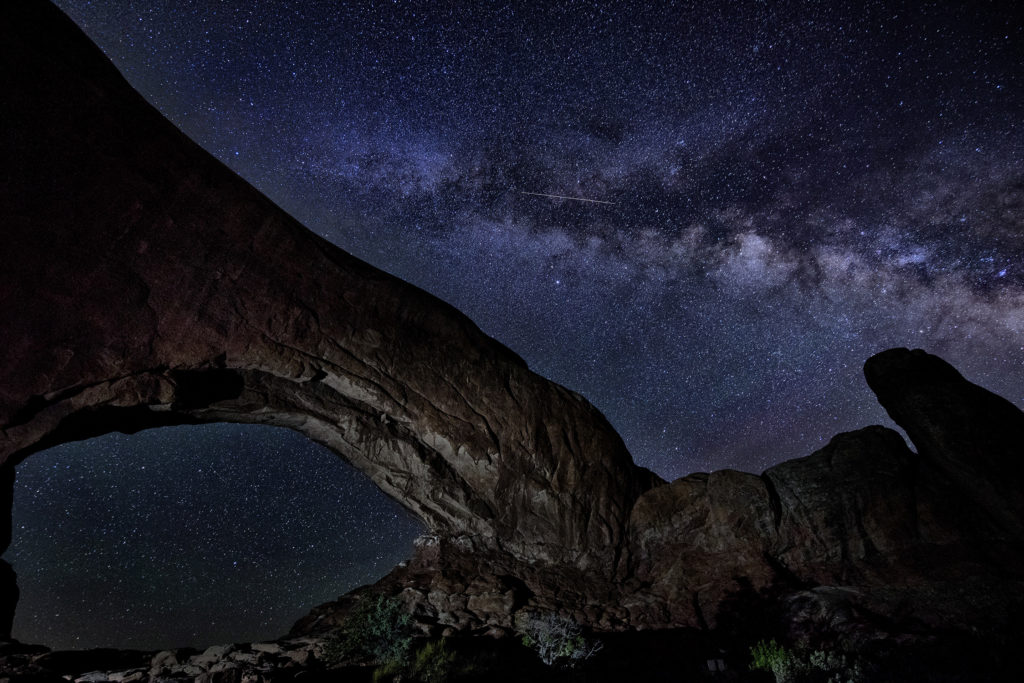 Ken Hubbard, an avid Tamron shooter, shares some of his tips for photographing the night sky in our National Parks.

Pack wide-angle lenses.
This is a no-brainer, since you want to get as much of that jaw-dropping night sky as possible in your photos. The lenses I typically use: the Tamron SP 24-70mm VC G2, the SP 15-30mm VC, and the SP 35mm F/1.8 VC. That prime lens is especially useful because of its fast F/1.8 aperture—it’s desirable to use fast apertures for night sky photos, as you want to reduce the amount of time your shutter is open to reduce star movement. With a 1.8 lens, I can shoot a 10-second exposure instead of 20 or 30 seconds.

There’s a magic number for any focal length you may be using and how long your shutter can stay open before you start getting those streaks in the stars. Although there are some complicated equations, let’s keep it simple. A basic guideline to get you started is the 500 rule: Divide the focal length you’re shooting at into 500; that resulting number will give you the number of seconds your shutter can stay open before you start seeing star movement. So if I’m shooting at 15mm, I can keep my shutter open for roughly 33 seconds. If you see movement in your stars, shorten your exposure.

Determine the optimal time to head out.
Our group tries to venture out during the blue hour, an hour or two after sunset, when there’s still some ambient light to create that beautiful indigo color. You can see an example of that in one of my Sedona photos shown here, where the featured rock formation was also lit up by the quarter-moon that had already risen. If you’re going to try for a money shot like the Milky Way, you’ll want to check apps like Sky Guide or PhotoPills to see where and when it will be rising. You don’t want to head out somewhere with a group of people and discover there’s no Milky Way overhead. Capturing it when the skies are darkest—typically between midnight and 2 a.m., depending on the time of year— is ideal. Between April and September provide your best looks: During other parts of the year, the Milky Way either never makes it above the horizon, or it’s too close to sunrise or sunset and will be completely washed out. You’ll barely see it, if at all. Research the park you’re going to.
I often start this process months ahead of time, so I’ll know the best times of year to visit, depending on what I’m planning on taking pictures of. Our group will also head out at least a day before a workshop, so we can scout the landscape to make sure it’s everything we were anticipating. You also want to get the lay of the land during the day so when it’s dark you’re not stumbling around with no sense of place.

It also helps to know which parks are rife with light pollution and which aren’t. You can check the International Dark-Sky Association website to see which communities have pledged to preserve the night sky by keeping lighting to a minimum. As far as the national park areas I’ve visited, Sedona is a designated dark-sky community; Zion isn’t too bad, either, and Acadia in Maine is pretty dark, as there aren’t too many towns around throwing off a lot of light. If you do have a park that’s lit up from afar, you can use that light to your advantage (or at least mask it) by using some creative techniques. More on that a little later!

Bring the basics …
A couple of things you’ll definitely need: a tripod, as you’re going to be taking very long exposures (20 or 30 seconds long in some cases). And you’ll want to bring a shutter release cable or some sort of shutter remote. You don’t want to be hand-firing the camera and risk losing images that way.

… and also a flashlight.
One, to see where you’re going, and second for light painting. That’s a terrific way to accentuate your images, like I did in my photo of Mormon Row in Grand Teton National Park. One tip I have for this type of creative endeavor: Don’t simply throw the light from behind your camera—your subject will tend to look flat. Because I’m usually taking 20- or 30-second-long exposures in these cases, what I’ll do is hit the shutter release, then walk to one side or the other of my camera and throw the light in from an angle, so it adds a little more dimension with shadows and highlights. Sometimes other photographers’ light-painting adventures can work their way into your own photos. This image I took of one of the arches in Arches National Park was a happy accident. I was about 20 seconds into a 25-second exposure when someone who was sitting underneath the arch decided to blast it with light. I didn’t know it was going to happen, but it turned out to be a cool picture anyway. Before you start flashing lights everywhere, know the rules of the park you’re visiting.
Workshop leaders need permits no matter what to host groups in most national parks. The group that ran this year’s night sky workshops for us was National Park Trips Media, which took care of all of the logistics.

Some parks outright prohibit the light painting I mentioned earlier, especially from large groups. I can understand that: It can be annoying to individual photographers or nature-gazers in a park, trying to check out the night sky, only to have a bunch of people show up all at once and start blasting light everywhere. Individually, you often can light paint without a hassle, though check with your destination park before you go, as each has its own rules.

Seek out elements in your landscape to enhance your composition.
Here’s where landscape photography during the day and at night doesn’t differ too much, because you always want some kind of landscape elements to create compelling visuals. That could entail some sort of silhouetted area or foreground visual—either a manmade one, like a building, or a natural one, like a rock formation.

More often than not, I’ll try to keep those foreground elements in the lower third of the frame, as I’m using them mainly to enhance the night sky I’m trying to show off. And since I’m typically using a wide-angle lens in my night photography, I get up real close to whatever I’ve decided my subjects will be, as those elements will appear very small in a wide-angle photo otherwise.

Tap into the leading lines of the landscape.
I use natural lines to draw the viewer’s eye to where I want it to go. For instance, in my Milky Way photo taken in Zion, I positioned myself so the Milky Way descends straight down into the rock formation with the tree sticking out of it. I’ll also use the shape and structure of the landscape to either enhance the photo or mask issues that might be threatening to distract from what I’m trying to show. For instance, in my other photo here from Zion, I used the lights of the town of Springdale in the distance to silhouette the trees in that gap. And in my image of Balanced Rock taken in Arches National Park, the horizon was really lit up from Moab. To work around that, I stood in a spot so that when I took the photo, the Milky Way streamed down toward the horizon—making it appear as if the Milky Way was lighting up the horizon, not the neighboring city.

You can find more of Ken’s work here.