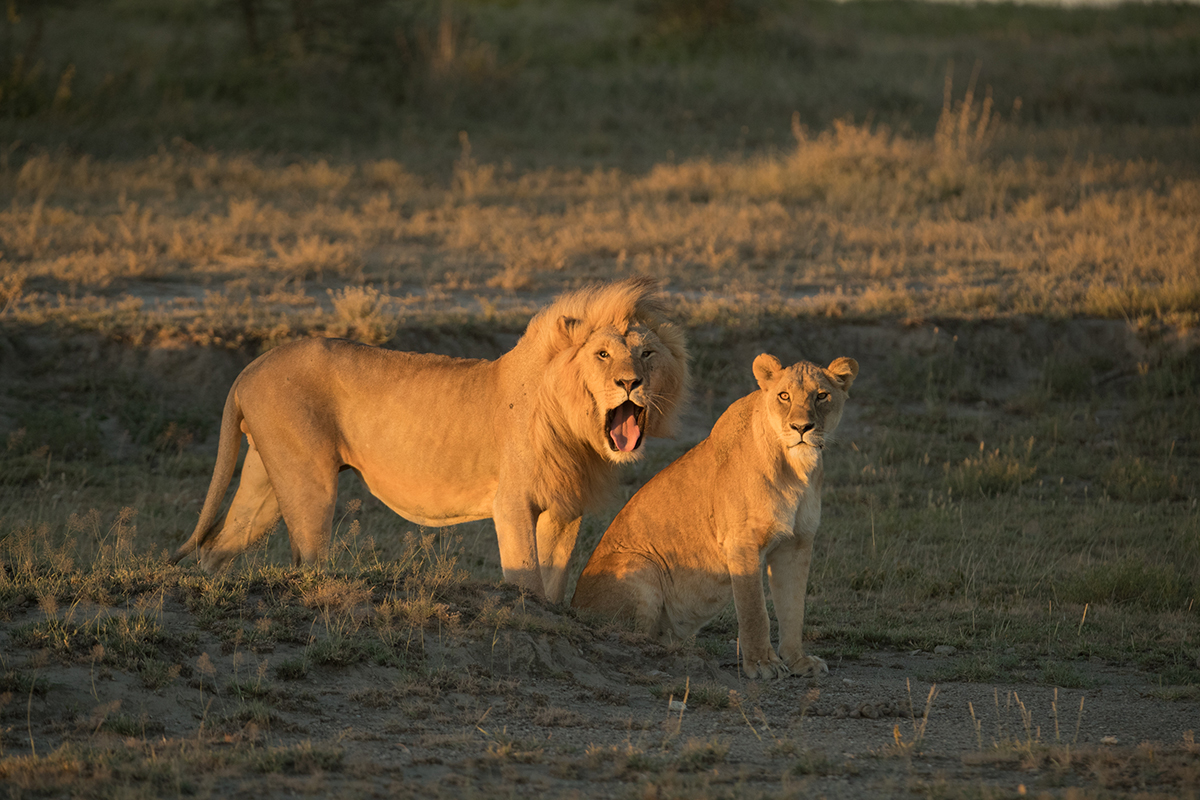 Joe and Mary Ann McDonald are said to be the most prolific husband-and-wife photographic team in the US, with more than 30 years’ experience in the field and a litany of achievements under their belt: yearly photo tours and workshops across the globe, books and instructional videos, a world record for non-research-related gorilla treks in Rwanda, and more than a dozen wins between them in the annual BBC Wildlife Photographer of the Year competition.

“It’s been awesome and a blessing to share this journey with Mary Ann,” Joe says. “As far as our photographic careers go, working together has certainly enhanced both of them. We’re very competitive with each other in terms of trying to do our best, but we’re not competitive in the sense of who actually captures the best shot. Ultimately, all we’re really concerned about is one of us getting that shot—it doesn’t matter who.”

Safaris are also a regular part of their annual itinerary. But although they’ve made many trips to Tanzania and Kenya, they experienced a first this winter when they returned there: This time around, they brought the new Tamron 150-600mm VC G2 ultra-telephoto zoom lens. “In the past, when we used fixed-focus lenses on safari, especially the big telephotos, as we approached the subject or the subject approached us, we’d have to switch to a smaller focal-length lens, generally mounted on another camera,” Joe says. “I’m sure we lost a lot of images during that transition. Now, with the 150-600 G2, I never have to put my camera down. Our photo productivity, both in terms of the number of images being captured and also in terms of compositional freedom and artistic capability, has increased hugely. Plus the weight of this lens makes it easy to carry around all day long. This is the only way I’m going to shoot from now on.”

With their gear wrapped in inexpensive raincovers to protect against the elements, Joe and his photo groups typically head out on safari before sunrise. “All the parks in Tanzania and Kenya have regulations that you can’t be out at night, but you can be out there right before dawn,” he says. “We’ll take pictures till around 11 or 12, when every intelligent being that’s not human decides to park itself under the shade of the trees. We humans can usually use a rest by that point, too, so we’ll head back to where we’re staying, get hydrated and fed, take a snooze, and just relax for a few hours. By 3 or 4, we’re back out there for the evening session, which lasts until the sun sets.”

The group travels in open-roof vehicles with crank-down or slide windows. “You can stabilize your camera by resting it on beanbags on the roof of the vehicle,” Joe says. “Or, if you’re trying to get a lower-angle shot from inside the vehicle, you can take pictures out the window by resting your lens on a bag.”

Knowing when to stop the vehicle while cruising around the African plains is critical to maximizing the photos you capture. “I always tell people to be proactive, not reactive,” Joe says. “That means anticipating what an animal might do or where it might go, then being there for it instead of simply reacting to what you see immediately in front of you. For example, if a lion is walking nearby, the average tourist will yell at the driver to stop as soon as they pull up sideways next to the lion. By the time the vehicle stops and the people in the vehicle are ready to shoot, the lion has already passed; now they’re just getting the tail-end view of things. What we do instead is drive ahead of the lion so we can capture photos as it walks toward us, as well as right at the moment when it passes us.”

Being somewhat familiar with the native wildlife’s habits and behavior can help set up compelling shots with an interesting storyline to go with it. “Take my photo of the ostrich followed by that carmine bee-eater, for instance,” Joe says. “As these ostriches move along, they kick up cicadas and grasshoppers, and the carmine bee-eaters follow along so they can snatch up those insects flying into the air. We were able to anticipate this ostrich was going to be crossing the road in front of us, so we drove to a position where we’d have a decent vantage point and started taking pictures. Now, the carmine bee-eater isn’t prominent in the picture, but if you know the story behind its habits, and how it follows the ostriches around, this picture is a perfect depiction of the commensal relationship between them.” 450mm, F/8, 1/1600th sec., ISO 1600
Two rhinos being “visited” by yellow-billed oxpeckers relayed a different kind of tale. “The oxpeckers use the rhinos not only as a feeding perch—they’ll also remove any parasites off the skin of the rhinos themselves, which is why they’re sometimes called tick birds,” Joe explains. “But while that sounds all well and good, these birds are just as likely to eat rhino meat as they are ticks, so if there’s an open wound, they’ll pull at the flesh of the animals. The birds in this photo are likely making the rhinos’ lives kind of miserable. They’re definitely not hero birds.”

600mm, F/16, 1/2500th sec., ISO 3200
Joe also appreciates this photo for the relationship it depicts between the mother rhino and her baby. “Rhinos are getting killed at an alarming rate in Africa,” he says. “Considering that rhinos are such a critically endangered species, capturing mother and baby together was an encouraging sort of photo to take.”

Knowing prime time for significant safari events is also key. “We time our trips to Tanzania to coincide as closely as we can with migration times—in this case we were there in February, when the wildebeests give birth,” Joe says. “There may be as many as 8,000 baby wildebeests born each day for about a month. And the zebras are often seen associating with them, so you’ll spot them moving together.”

On the day Joe captured this shot of the two species running together, it was just the beginning of the wet season, when water isn’t easily found, so the animals were moving fast to find a place to drink. “This is where your camera’s high-speed motor drive can come in handy,” Joe explains. “You can’t just take one photo and think, ‘I’ve got it.’ Shooting multiple frames is crucial if you want to capture at least one or two decent photos in a situation like this.” 309mm, F/18, 1/1000th sec., ISO 1600
A more poignant relationship found its way in front of Joe’s camera when he captured a lion and lioness standing next to each other in Tanzania’s golden morning light. “It was pretty clear out that day, with a little dust that imparted that orange hue,” he says. “But there was kind of a sadly comical story behind this photo. That male lion kept trying to mate with the female, but she kept moving and wouldn’t let him—she had her eyes on another male across the stream. Eventually she moved over to the other one and the rejected male stayed behind, dejected, because he was intimidated by the second male, whom she ended up mating with. You wouldn’t be able to tell from this earlier picture that all that drama was going on, though.” 309mm, F/5.6, 1/800th sec., ISO 1600
As important as it is to learn animal behavior and anticipate it for your captures, incorporating the African landscape into your safari photos is also a way to add context. “Take the two lionesses I captured,” Joe says. “For an image like this, the scene was just as much about the landscape and dramatic dark sky as it was about the lions themselves. Taking pictures of the animals in their natural habitats tells its own story. The cats cooperated by walking right to where we could photograph them. Between the magic of that dark cloud and the angular light of late afternoon, that picture just speaks ‘Africa’ when you look at it.” 329mm, F/22, 1/500th sec., ISO 2500
The same held true for a lion lounging in front of a kopje, a rock outcropping commonly found on the Serengeti. “What’s funny was we had two or three vehicles in our group, and a couple of the vehicles moved in close so everyone inside could shoot a portrait of the lion,” Joe says. “But I moved our vehicle off to the side so we could capture the kopje behind the lion. Again, I wanted to add some context to the image. Often, the mindset for these types of shots is to fill the frame, but while those type of portraits can be stunning, you often can’t tell if it’s a picture taken on the African plain or in a zoo. It sometimes helps before you take the photo to think about what will be more meaningful to you when you see these images down the road.” 160mm, F/10, 1/800th sec., ISO 800
Joe says he and Mary Ann haven’t had too many close calls on their adventures, but that’s because their groups know to respect the animals’ domain. “Once in Tanzania a male lion walked by and swished his tail, and the tail went into the window and slapped somebody on the side,” he says. “And in Kenya, we’ve had cheetahs actually climb on the vehicle and use it as a lookout. On occasion, a buffalo or rhino looks like it may start to charge, at which point we just drive away. We’ve obviously ticked off that animal and it’s showing aggression when it normally wouldn’t. Our mantra is we’re there to observe and to photograph—not to stress the animals out. Fundamentally, the animals’ welfare comes first.”

To see more of Joe McDonald’s work, go to www.hoothollow.com.