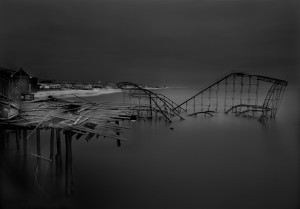 We wanted our Gallery 270 at Bergen County Camera friends to be among the first to see this compelling image of The Casino Pier that Michael just photographed November 10th! It’s leaves me just speechless. This is such a achingly beautiful shot and an instant icon of documentary photography. We already have a framed print at our Westwood location, this man does not stop! Michael hand his family have lived in Seaside Heights for decades and one of his first bodies of work documented the Boardwalk attractions now devastated by the hurricane. Martial law is currently in effect in the town of Seaside Heights. Michael only managed to get permission to do this shot only since he was there already assisting his uncle on his house. No one else will ever be able to capture this image, and no one could ever imbue it with more sensitivity and resonance. Looking into this compelling image midpoint at the extreme left side of the photo, the painted spotlights of “The Music Express” ride that Michael first immortalized in 2009, are all that remains. It is a stark reminder of a storm that devastated anything in its’ path.

One thought on “Michael Massaia – Haunting Images of the Jersey Shore”