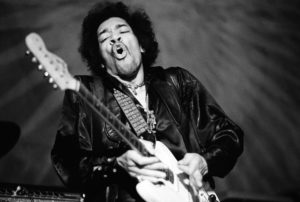 Meeting Baron Wolman by Tom Gramegna
About 20 years ago, I was reading through a copy of “B&W Magazine” and I came upon this compelling photograph that I had seen many times before. I did not know that it was done by Baron Wolman, first chief photographer, and at the time it was taken, actually part owner of Rolling Stone Magazine.

There was a phone number below, seeking gallery representation. Since this was the definitive photograph of one of my musical heroes,  there was no choice for me, I had to call that number. As someone who grew up so entranced with the music and culture of that time, it was an opportunity to connect someone who experienced this magical moment in history up close. Strangely enough and to my delight, Baron actually answered his own phone. We spoke an hour or two, and  became instant friends on the phone. Baron sent me a copy of his book Classic Rock and other Rollers inscribed “this can be big fun”.

In the twenty or so years of our friendship and professional relationship, that’s the premise upon which all the adventures we’ve embarked on have been planned! And this latest show celebrating the 50th Anniversary of Rolling Stone Magazine is the latest iteration in the mixture of fun and business that we’ve instigated for just about two decades. We’re so looking forward to having fun with all of you and our buddy Baron as we travel back to that period in time that still resonates with so many.

The best photographs go further than just showing the literal. They capture a spirit, an essence, and something of the person’s real character shines through. Baron’s photographs still have such power and magic so many years after they were taken, because they document a very special and innocent time before  rock and roll became big business. Luckily for all of us, Baron lived in the city at the center  of  the music culture that captivated the world in the late sixties, San Francisco. His neighbors were Janis and Big Brother, Jimi Hendrix, The Grateful Dead, and Jefferson Airplane. He had their trust since he was “one of the tribe”. Baron’s photos of Janis Joplin are so poignant because they give a glimpse into the little girl inside the tortured soul with the great potential  for joy that she unfortunately experienced so little of.

I believe the essence and power of photography lies in its humanity. It’s the humanity of the person or events  depicted and also very much the humanity of the person behind the camera. In my many years of dealing with Baron in the placement of many hundreds of his photographs in homes, collections and museums all over the world, the power of his humanity, endless  creativity and the generosity of his spirit overrides all other thoughts  of the wonderful man who is Baron Wolman. Further evidence of just his latest bout of creativity will be on display at Gallery 270 in the form of his current collaboration with fine artist Sophie Kipner and her unique Blind Line Contouring. Moved by the images Baron created, Sophie’s unique creative process results in one of a kind works on canvas which are paired with the original photographs they were inspired by.

Please join us to welcome Baron Wolman for his solo exhibition Baron Wolman: Rolling Stone Magazine Fifty Years Down the Line, opening on Thursday November 2nd from 7-9PM in Westwood. We’ll celebrate the 50th anniversary of Rolling Stone Magazine and the photographs of its first chief photographer that were its graphic centerpiece. Refreshments served, all are welcome, admission is free.